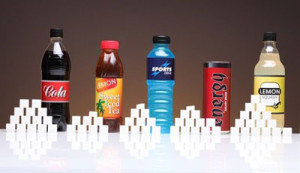 The “Rethink Your Drink” campaign tries to get people to cut back on sugar laden drinks.

Almost one in every three Iowans is obese, according to the latest rankings, and what we’re drinking can be just as fattening as what we’re eating.

Carol Voss, a registered dietician and a nutritionist with the Iowa Department of Public Health, says just one 12-ounce soda contains around 150 calories and 40 grams of sugar, which in itself is more than the daily recommendation. It’s much worse for the 20-ounce pops.

“If you were thinking of opening those sugar packets you find at a restaurant table, the 20-ounce bottle would be 16 of those dumped into that plastic bottle,” Voss says. “So, you can see how that might exceed what we’re supposed to be consuming.” A state survey in 2012 found that 72-percent of Iowans consumed between one and three sugar-sweetened beverages daily. For women, it was 67-percent and 77-percent for men.

Voss says a campaign called “Rethink Your Drink” is urging Iowans to consider cutting out at least some of those sweet drinks and trading them for water or a non-sweetened tea. “It’s just a way of being a little more realistic about the calories we’re taking in,” Voss says. “When people are looking at ways to balance your calories, we look at the food we eat rather than the beverages we take in and beverages can be a very easy thing to modify.”

Drinking one soda a day can equal an extra 25 pounds of weight per year. The latest “State of Obesity” report from the Robert Wood Johnson Foundation finds 31-percent of all Iowans are obese, the 12th highest rate in the country. Sugar-sweetened beverages are the largest source of added sugar in the American diet, and that contributes to things like obesity, diabetes and cardiovascular disease.