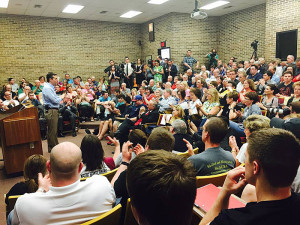 Ted Cruz speaks to a crowd in Sioux City.

Cruz told the crowd many Republicans and conservative Democrats have been “awakened” by the furor over Indiana’s new law that would protect businesses that refuse to serve some customers, for religious reasons.

“We need to stand up as courageous conservatives,” Cruz said in Sioux City. “You know, religious liberty is not some fringe view. It is the basis of this country. America was founded by people fleeing religious persecution.”

Some in the crowd nodded their heads while others said things like, “That’s right” and “Amen” as Cruz discussed the subject. According to Cruz, many “Republican politicians” are “terrified” to address the issue. And Cruz blasted some of the nation’s top corporations for “persecuting” those “dare to oppose” same-sex marriage.

Cruz got extended applause from the crowd when he said marriage is a “holy sacrament” that is “the union of one man and one woman.”

Every one of the 160 seats in the Morningside College Auditorium was filled and organizers set up three other rooms to accommodate the overflow crowd of students and GOP activists who showed up to see Cruz. Cruz attended a Dubuque County Republican event last night. He’ll be in Cedar Falls for a town hall meeting later this morning and in Cedar Rapids this afternoon for another public event. He’ll wrap up his latest Iowa visit with a stop in Des Moines tonight.