You are here: Home / Sports / Iowa’s Woods getting used to coaching football from offensive side 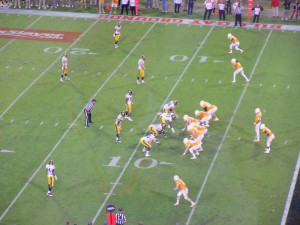 Iowa made some changes after their bowl game loss to Tennessee, including switching Levar Woods from linebackers to tight ends coach.

As the Iowa football team goes through spring drills the faces on the coaching staff remains the same but some of the roles have changed.

LeVar Woods has moved to the other side of the ball. After coaching the linebackers last season Woods was asked by Kirk Ferentz to become the tight ends coach. Woods says he was shocked and surprised, but says he is excited to get to coach the tight ends at “one of the greatest schools for tight ends in the country.”

It has been a transition for Woods who was a standout linebacker for the Hawkeyes. “It’s definitely a new era for me, it is a position I have not played since the scout team in the Hayden Fry era,” Woods says.

Woods says only the quarterback has more responsibility on offense than the tight end as they are involved in the run game, pass game, picking up the blitz and several other things.

The change in roles has made this spring unique as he says he feels like he is at a different place, and the only thing that is familiar are the faces he sees. “But change is good, change makes you a better person, it makes you better at what you do,” Woods says.