You are here: Home / Human Interest / Pony Express Riders head out on mission for Camp Sunnyside 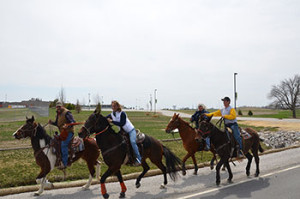 Several hundred riders on horseback from across the state are saddling up for the journey to Camp Sunnyside near Ankeny this Easter weekend. For 47 years, the riders have traveled to the Easter Seals facility, bringing with them money from dances, toll roads and other fundraising activities.

Tim Allen of Whittemore is the president-elect of the Pony Express Riders of Iowa. “We start in different towns and we all end up at the John Deere plant in Ankeny,” Allen says. “We relay it, mile for mile, on horseback along the side of the road with pilot cars and escorts.” More than $280,000 was raised last year by the Pony Express Riders to help with the camp that has been in operation for 80 years.

After the ride to the camp, Allen says there’s a celebratory dance.”It’s just a big thank you to all of the volunteers,” he says, “because everything that the Pony Express Riders do, everybody that’s part of that is a volunteer. There’s no kickback. Their time, their fuel, everything is volunteered.” Allen expects between 200 to 300 people will be riding their horses as part of the event this weekend. The ride has been held every year since 1968.

Allen has some advice for motorists this holiday weekend. “If you see a horse out on the highway, respect it,” Allen says. “There are going to be a lot of horses throughout the whole state. They’re going to try to be as safe as they can be but they’ll also appreciate it” if motorists use extra caution. Learn more at: www.ponyexpressridersofiowa.org.