Four people are facing charges after an armed bank robbery Monday in eastern Iowa’s Jones County. The robbery was reported over the noon hour at the Exchange State Bank in Martelle.

Bank officials told deputies that two suspects, carrying “long guns,” made off with an undisclosed amount of money.

They left the bank in a car that was found a short time later abandoned and on fire. Investigators believe the two suspects ditched the car and got in 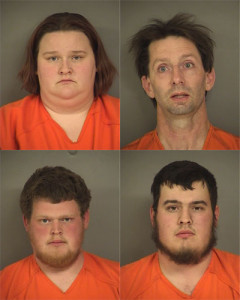 Authorities eventually arrested 24-year-old Andrew Palmer of Mechanicsville and 22-year-old Shiloh Palmer of Mt. Vernon. The two men are brothers and both are charged with first-degree robbery.

Their sister, 25-year-old Elizabeth Olinger, and her husband, 41-year-old Peter Olinger are accused of aiding and abetting the robbery by driving the two getaway cars. Janelle Tucker, Radio Iowa, Manchester.