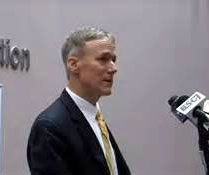 The city council in Sioux City has approved a settlement with an employee in a federal civil rights lawsuit against the former city manager. The city council voted 4-1 Monday to approve the $300,000 settlement for Brittany Scott.

Scott sued then City Manager Paul Eckert claiming he began to sexually harass her in 2000 after she got divorced. She also claimed Eckert retaliated by reducing her pay and benefits and creating a hostile work environment when she rejected him. Eckert later resigned to take another job in California.

Under the terms of the settlement, the city admits no wrong doing or liability. Scott will receive $108,000 and her attorneys $192,000. The current city manager says the total cost of defending the lawsuit isn’t know yet.