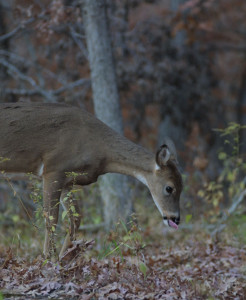 DNR photo of a deer.

Tests on samples from deer in special hunt earlier this year in the northeast corner of Iowa showed no new cases of Chronic Wasting Disease. DNR wildlife biologist Terry Haindfield says they focused on the area near Harpers Ferry where two wild deer had tested positive for CWD following this year’s hunt.

“We were excited that all 85 samples came back not detected for CWD,” Haindfield says. They had hoped volunteers would take as many as 200 more deer in the area for samples, but the weather did not cooperate. “The weather was really strange where it went form 25 below to 65 above in that short period through there. But again, we’ve just got to say thanks to the locals who really helped in some of those adverse conditions,” Haindfield says.

Haindfield says the sampling they did get done gave them some valuable information. “As far as it (CWD) is not as prolific as it could have been,” Haindfield says. And he says they were able to talk to a lot of people in the area through the special hunt and they will be able to get a lot more samples in the next deer hunt later this year.

There have been a total of four positive CWD tests in the state, and all have come from deer in Allamakee County — leading to some speculation that the infected animals may’ve come from an adjacent state where CWD is more prevalent. Haindfield says the additional testing can’t confirm that idea.

“Not really. We still probably will never know where this actually came from,” Haindfield says. “That is a very high likelihood, it cold come from the river, deer can cross the Mississippi River. It also just shows that it has not spread in this area for the number of samples that we took in that region.”

CWD is a neurological disease affecting primarily deer and elk. It is caused by an abnormal protein or prion that attacks the brains of infected animals, causing them to lose weight, display abnormal behavior and lose bodily functions. Signs include excessive salivation, thirst and urination, loss of appetite, progressive weight loss, listlessness and drooping ears and head. It is always fatal to the animals. The DNR says the disease is not spread to humans. The state began testing for CWD in 2002.