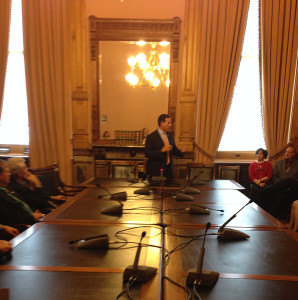 Rick Santorum, the winner of Iowa’s 2012 Caucuses, is presenting himself as a seasoned candidate who wouldn’t have to prove his “conservative credentials” to voters and could step into the 2016 race with a unique understanding of foreign policy.

“We’re thinking very hard about whether to go again because when I look at the situation as we all expected when we said this was the most important election in the history of our country back in 2012, it turned out to be the case,” Santorum said this afternoon. “Things have gotten a lot more difficult, particularly internationally.”

Santorum said he developed a “singular focus” on Iran after 9/11 and he issued this dire warning about the framework of the deal being negotiated with Iran: “This is a theocracy whose goal is to bring about the ‘end of times’…global war. That’s their theology and we are on a path that can give them a weapon that can bring that about.”

This evening Santorum is speaking to a gathering of Dallas County Republicans in West Des Moines. He met earlier in the day with a group of 2012 supporters gathered at a Des Moines restaurant known for its tenderloin sandwiches. Santorum also spoke to over a dozen legislators this afternoon in a statehouse committee room and Santorum made it clear he hasn’t yet decided whether he’ll run again.

“As you know, we’re sort of in the process right now of doing what 16 or 17 other people in the country are doing. Seems like more,” Santorum said, smiling, as he began speaking “But we’re kind of out there and talking to folks and talking about a message.”

AUDIO of Santorum’s appearance before legislators, 31:00

Santorum is among a handful of Republican presidential prospects who will be in the state tomorrow to meet with Iowa families who homeschool their children. The Network of Iowa Christian Home Educators will be holding an all-day convention in Des Moines.