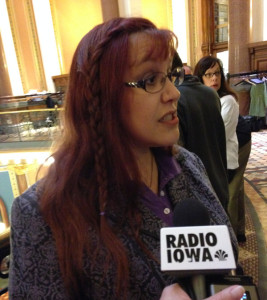 These words from a Wiccan priestess prompted “peaceful protest” and prayers from Christians early today who were inside and outside the Iowa House.

“We call this morning to god, goddess, universe, that which is greater than ourselves, to be with us here today.”

That was the first sentence of the opening prayer 43-year-old Deborah Maynard of Cedar Rapids, delivered in the Iowa House of Representatives at 8:30 this morning.

Maynard is both an Unitarian Universalist and a Cabot witch in the pagan tradition of Wicca, which she describes as “earth-based spirituality.” She spoke in the House for 70 seconds.

“By the earth that is in our bones and centers us may all here remember our roots and those we are here to represent,” Maynard said. “By the fire that gives us light and passion may all here remain passionate about the work that must be done for the people of Iowa.”

Afterwards Maynard told reporters her aim had been to deliver an “inclusive” message.

Several House members arrived late today, to avoid being on the House floor when Maynard was there. Representative Liz Bennett, a Democrat from Cedar Rapids, invited Maynard to speak and she told reporters her goal wasn’t to “force anyone” to listen.

“I don’t feel upset at all. If some people did decide not to attend, that’s o.k.,” Bennett said. “My purpose was to really include one of my constituents. Iowa is a very diverse state and I’m glad I could do something just a little more open and welcoming.”

Maynard is the first witch or Wiccan to have been invited to deliver the opening prayer in the Iowa House. Representative Rob Taylor, a Republican from West Des Moines who is a Christian, said he thought about skipping Maynard’s prayer, but decided to stand silently on the floor of the House, with his back turned to Maynard.

“I prayed about this a lot the last several days and I thought to myself: ‘What would Jesus do?’ Jesus would be in the chamber, from my perspective. He would passively protest and then he would seek that individual out, have a peaceful conversation with them about why his way was the best way, so that’s what I did today,” Taylor said. “I just peacefully protested.” 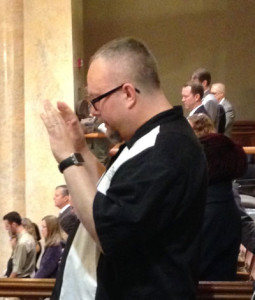 Pastor Michael Demastus of the Fort Des Moines Church of Christ was in the balcony overlooking the House floor, praying as Maynard prayed below.

Michele Gute of Huxley was in the balcony praying, too, after learning about Maynard’s appearance in an email from The Family Leader.

“I was praying for a hedge of protection for the people who are making decisions on our behalf,” she said.

Senator Dennis Guth, a Republican from Klemme, was in the House balcony this morning, too, and he thought Maynard’s words were a bit of a “non-event” — though he noted the capitol was shrouded in a heavy fog this morning.

“I don’t believe in coincidence,” Guth told reporters. “Another way of saying that would be ‘God incidence’ and I think some people can say that’s stretching things quite a bit, and I think that God’s hand is in everything and there is no such thing as a coincidence.”

Representative Dave Heaton, a Republican from Mount Pleasant who is a Christian, was late getting to the capitol today, but not by design. He had planned to attend.

“If we want to make a stink about who can do this and who can’t, we’re liable to lose the whole thing,” Heaton said. “So let’s just move on and continue to have our prayers to open our sessions and we’ll be o.k.”

In 2014 the U.S. Supreme Court ruled “sectarian” prayers before government meetings are constitutional, as long as the prayers are “not coercive” and do not require participation by people who do not share the same beliefs. Both the Iowa House and Senate begin their workdays with a prayer or some sort of moment of reflection. Some prayers are delivered by legislators themselves, but often legislators invite a guest to make the remarks.