You are here: Home / News / Republicans decry ‘assault’ and ‘jihad’ against Evangelical Christians 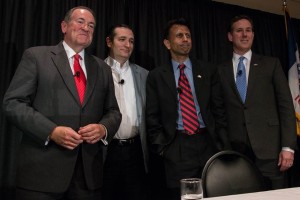 A senator, a governor and two former winners of the Iowa Caucuses met with hundreds of Iowa home schooling families this afternoon, focusing on what they termed an “assault” on America’s Christians.

Texas Senator Ted Cruz, the only “official” GOP presidential candidate at the event, said religious liberty should be “front and center” in the 2016 election.

“And we look at the jihad that is being waged right now in Indiana and Arkansas, going after people of faith who respect the Biblical teaching that marriage is between one man and one woman,” Cruz said. “We need to bring people together to the religious liberty values that built this country.”

Former Arkansas Governor Mike Huckabee, the winner of Iowa’s 2008 Caucuses is thinking about a second bid for the White House. Huckabee said he has “sincere high hopes,” but big concerns about whether evangelical Christians will “raise their voices” to respond in 2016.

“I fear that there will be a lot of people who will sit it out, who will say, ‘It just doesn’t matter whether I vote or not, whether I get active or not,'” Huckabee said. “But it really does matter.”

Louisiana Governor Bobby Jindal, a former Republican congressman, has sent staff to Iowa to prepare for a presidential campaign. Jindal told the crowd that recent controversy in Arkansas and Indiana over Religious Freedom laws show Christians are under assault “from Hollywood elites and corporate America.”

“I think voters are looking for a conservative alternative,” Jindal said. “If we give them a ‘cheaper Democrat’, they’re staying home.”

Another unannounced candidate — former Pennsylvania Senator Rick Santorum — won Iowa’s 2012 Caucuses and he told the crowd of home schoolers to trust their own judgement when it comes to deciding which candidate would best advance their Christian values.

“Do not defer to the ‘experts’…They don’t know what they’re talking about,” Santorum said. “What this country desires…they want someone who’s going to stop the acrimony, who’s going to bring this country together and is going to do it with principles that made our country great.”

The four men participated in a panel discussion at the Network of Iowa Christian Home Educators convention in Des Moines. Former Texas Governor Rick Perry, another possible 2016 presidential candidate, met with the home schooling families earlier in the day at the statehouse.

“We see how energy can be used in a malignant way through the actions of Russia,” Perry said. “Energy is a weapon in the hands of an aggressor, so I say if energy is going to be used as a weapon, America needs to have the largest arsenal.”

Jindal and Santorum spoke at the energy forum, too. It was sponsored by the American Coalition for Clean Coal Electricity.

(This story was updated at 5:31 p.m. with additional information.)