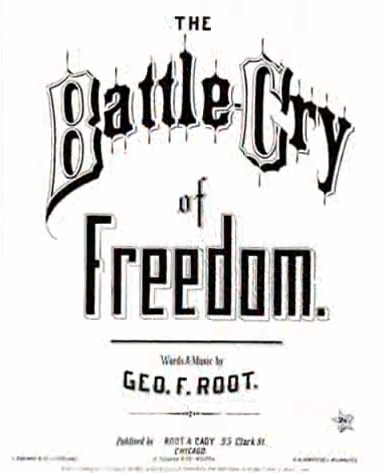 An all-male central Iowa choir will perform a score of songs from the 1860s in a special concert this Sunday to mark the 150th anniversary of the end of the Civil War.

Jim McLallen, who calls himself a “Civil War geek,” is helping organize the historical, musical event in Des Moines which is based around a series of songs he learned while donning a uniform as a Civil War reenactor.

“We would, in truth, sit around the camp fire and sing some of these songs,” McLallen says. “It was something that back in the pre-electronic, pre-electricity days, this is how, people, not just soldiers, but people in the 1860s entertained themselves because they had to do it themselves.”

McLallen recently moved to Des Moines from Clinton, where some of the mock-battles were staged. The songs are all authentic, he says, and there will be a story told before each one is performed.

While many people may be familiar with “The Battle Hymn of the Republic,” he offers a few other examples of songs they’ll sing: “‘The Battle Cry of Freedom’ is a rallying cry that was written in 1861 for the Union soldiers,” McLallen says. ‘The Bonnie Blue Flag’ is a rallying cry for the Southern troops which, of course, indicates they don’t like the Northern guys trying to take over the South. They feel it was treachery.”

The 25-member choir is comprised of members of St. Luke’s Episcopal Church in Des Moines as well as from two fraternities at nearby Drake University.

McLallen says the concert is to both honor today’s military personnel and those who served more than 15 decades ago.

“The sacrifice of the soldiers in the 1860s in the Civil War, as well as their families, was significant,” McLallen says. “That war cost the lives of somewhere between 620- and 650,000 men over a four-year period, keeping in mind that the total population of the entire country at that time was just 30-million, including about 4-million slaves.”

Contrasted with today’s nationwide population, he says that would be the equivalent of losing between six- and seven-million men over four years of war.

The concert will be held at 2 PM on Sunday at St. Luke’s Episcopal Church in Des Moines. There will be a free-will offering to benefit the Fisher House Foundation, which provides free lodging, meals and programs to family members of servicemen and women who are undergoing treatment.