You are here: Home / News / Unopened prison to host Board of Corrections 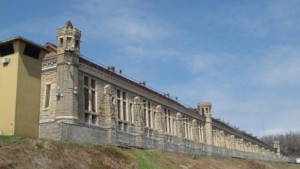 The Iowa Board of Corrections will hold its meeting today at the site of the not-yet-opened state prison in Fort Madison. Nick Ludwig is warden at the Iowa State Penitentiary, which first starting housing inmates in 1839. A new facility had been scheduled to open last summer, but remains empty after a series of problems.

Ludwig has worked as seven different prison facilities and says he’s “been through this type of situation before,” but he notes most of the 440 employees of the Iowa State Pen have never been through such as experience. “It’s been hard for them not to internalize, you know, us being on the front page about ‘delayed prison’ and ‘soaring prison costs’ and I remind them that none of that is through any fault of their planning, their dedication, devotion, and determination to making this new prison a wonderful place for staff to work and offenders to be housed,” Ludwig says.

State officials are in negotiations with contractors seeking payment for fixes at the new prison. Ludwig says those issues shouldn’t overshadow the hard work that Iowa State Pen employees do every day. “Bad news travels faster than good in the media and with prisons, our bad news is front page news and our good news is often some place else,” Ludwig says.

The problems in the new prison have primarily involved the heating and ventilation system and the system that’s supposed to siphon smoke out of the prison in the event of a fire. “As far as frustration…we deal with adversity every day and our priorities shift every day, so would it have been nice to be in (the new prison)? Certainly, but I’ve been involved in a lot of builds and reconstructions before and it’s not uncommon to run into snags. It’s unfortunate, but it’s not uncommon,” Ludwig says.

The prison’s total cost has climbed to $166 million. It was once estimated at $132 million.