You are here: Home / News / Clinton: ‘I want to build the economy of tomorrow, not yesterday’ 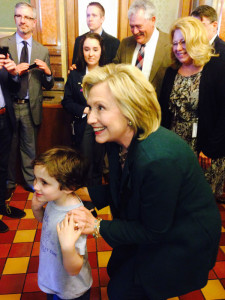 Hillary Clinton met Silas Miller of Grimes during a stop at the Iowa Capitol.

A large crowd of onlookers gathered inside the first floor rotunda of the Iowa statehouse this afternoon for a glimpse of Democratic presidential candidate Hillary Clinton. She is in a private meeting at this hour with Democrats who serve in the Iowa House and Senate.

As Clinton walked by a row of reporters, Clinton said she was “having a great time” in Iowa. Clinton shook hands with several in the crowd and she took a picture with five-year-old Silas Miller of Grimes, who was wearing a gray t-shirt that said “Iowa: wave the next time you fly over.”

“It was awesome,” the young man told reporters after meeting Clinton.

His mother, Carrie Mueller, got a tip from someone inside the building that Clinton was coming. Twenty years from now, when they see the picture snapped today, Mueller may be able to say: “My son took his picture with the first woman president, which is very cool.”

Clinton made the trip to the statehouse after a roundtable discussion with a handful of small business owners in Norwalk.

“I want to build the economy of tomorrow, not yesterday, and I want to make middle class mean something again,” Clinton said. “And you cannot do that if you don’t have small business really building and driving economic growth.”