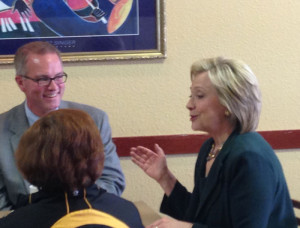 Democrat Hillary Clinton at a coffee shop in Marshalltown.

Democratic presidential candidate Hillary Clinton met with a small group of Democrats in a coffee shop in Marshalltown this morning.

A trio of retired school teachers who live in Marshalltown meet at the Tremont coffee shop most every morning and two of the three supported Clinton in the 2008 Caucuses. Karen Elder said she has “several months” to decide whether to support Clinton in 2016.

“I’ve always liked Hillary Clinton. I would have hoped she’d win the last election,” Elder said. “…But the voting arena is wide open, so whether I’ll vote for her or not, I don’t know.”

Donnis Grier supported Clinton in ’08, too, and this is her message to Clinton today.

“I think you’re the best prepared person for the job,” Grier said. 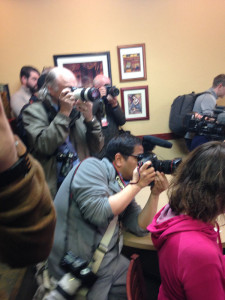 Photographers trying to get a picture of Clinton.

Pat Williams, a Republican and the third woman at the table in the back, was coincidentally wearing a red sweater today.

“I think she’s a lovely lady but not my choice,” she said.

Clinton walked in around 10 o’clock and chatted with the coffee shop’s owners. J.P. Howard renovated the property in the late 1990s and has had presidential candidates like Bill Bradley and Rick Santorum stop by, with a media entourage like the crew that showed up this morning to record Clinton’s movements.

“This is a very similar modus operandi,” he said of the media and campaign entourage that invaded his shop.

The waiter who took Clinton’s order said she asked for a latte with skim milk.

“Keeping up her figure,” he quipped as he rushed to fill orders from the others sitting at Clinton’s table.

Some of the regulars at the coffee shop say they remember when former President George H.W. Bush and his wife, Barbara, visited the same area of Marshalltown, which is just off the courthouse square. They said the Bushes walked 12 blocks down Marshalltown’s Main Street to visit the Iowa Veterans Home as well as the city’s central business district.