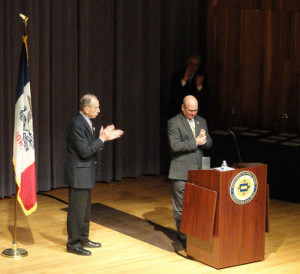 Domino received the award for his action during the October 30th robbery of the Maynard Savings Bank in 2012. Two heavily armed men fired at law officers, wounding one. Trooper Domino located the suspects and pursued them and was eventually hit by fire in the right bicep.

Domino continued the pursuit despite his injury, and returned fire. The suspects crashed into a ditch and fled on foot to a heavily wooded area. The two were later found and convicted of the bank robbery and are now in prison.