You are here: Home / News / Loebsack in Des Moines to talk 2016 campaign strategy 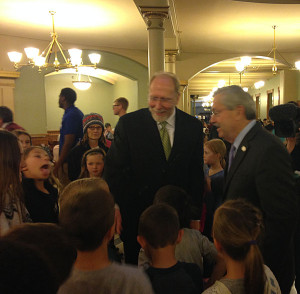 “There’s no question, no matter who the presidential nominee is, that person is going to have the biggest operation in the state, by far, even with the senatorial race this year, but she is going to be the key in many ways — she or whoever the nominee is,” Loebsack says. “And the rest of us will have to do our own thing as well and have our own organization.”

Loebsack, a Democrat who has served in the U.S. House since 2007, is planning to seek reelection next year in the second congressional district, which spans 24 counties in the southeastern section of the state. He recently went to his hometown in Sioux City, however, to help recruit Democrats there and hold a fundraiser. He’s doing more traveling than normal, since he is the lone Democrat in Iowa’s congressional delegation.

“There are going to be competitive elections in the state this next time around, especially with the presidential race and so I think that’s going to provide a lot of opportunities,” Loebsack says. “We already see up in the first district there are three folks in that race and a couple of them raised a pretty fair amount of money.”

Two of the three Democrats who are running in the first congressional district raised almost seven times as much as Rod Blum of Dubuque, the first-term Republivan congressman from that district. Loebsack also predicts there’ll be a competitive Democratic Primary in Iowa’s third congressional district for the chance to run against Iowa’s other freshman congressman, Republican David Young of Van Meter. Loebsack, who was at the capitol in Des Moines Monday afternoon, met privately with the 69 Democrats who serve in the Iowa House and Senate.