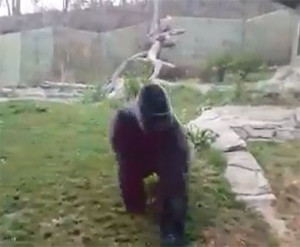 The gorilla exhibit at Omaha’s Henry Doorly Zoo is open again after one of the 375-pound primates went ape last week and hurled himself at the glass, shattering one of the panes. A short video of the incident has gone viral on YouTube with nearly 16-million views. The zoo’s general curator Dan Cassidy says this kind of thing occasionally happens.

“There was never any danger to the public or danger of the animal escaping,” Cassidy says. “It’s a three-layer laminated glass and only one pane broke.”

In the 12-second video, you can see a reflection of a young girl, beating her fists against her chest and grinning. In moments, the silverback gorilla throws himself at the window and large cracks appear as the kids and the camera operator scurry away. “The gorillas were interacting with each other, the way that they do and sometimes they like to make a lot of noise and show how tough they are,” Cassidy says. “Kigito, a 20-year-old male came up and hit the glass and it fractured.”

The incident has led to much speculation online about how safe the facility may or may not be, but Cassidy offers reassurance. “There have been occasions where they’ve hit it just right and it does break but again, we’ve never had an escape here,” Cassidy says. “There’s no reason to think that it’s not safe. I wouldn’t be standing here if it wasn’t.”