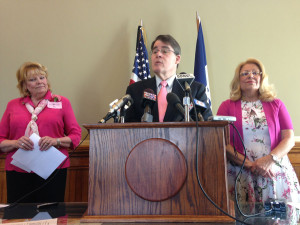 Many Democrats in the Iowa legislature are wearing pink today, as a show of support for hundreds of Iowa teachers who’ve gotten “pink slips” due to uncertainty about state support of public schools.

Representative Cindy Winckler, a Democrat from Davenport, is a former classroom teacher.

“Waiting this long to make that decision hurts the school districts, but it hurts Iowa,” Winckler said during a statehouse news conference.

By law, the decision should have been made almost 15 months ago and school administrators were faced to make budget decisions this month for the school year that begins this fall. Senate Democratic Leader Mike Gronstal of Council Bluffs says as of today (Thursday), Iowa school administrators report sending out 1130 “pink slip” lay off notices to teachers.

“I’m wearing a pink tie today in solidarity with the children and families of the state of Iowa,” Gronstal said during the weekly news conference Democratic leaders hold during the legislative session. “We’re going to have more crowded classrooms, more kids are going to fall through the cracks, more programs are going to be dropped.”

After Democrats offered to “split the difference” between what Democrats and Republicans had proposed, Gronstal said he’s offered “some ideas” to Republicans, in private, to try to resolve this school funding impasse.

“We’re going to wait until they decide to talk with us about some middle ground, but we’re not going to keep throwing out half-steps and hope that they sometime bite,” Gronstal said.

House Speaker Kraig Paulsen, a Republican from Hiawatha, has repeatedly said Republicans want to change the law, so legislators can make spending decisions on state aid to public schools just before the school year starts, rather than more than a year in advance.

“It’s a frustrating situation. We think it’s wise and prudent to make the decision when you’re in the proper position to make it,” Paulsen said today during Republican leaders’ weekly statehouse news conference.

Republicans have stuck to the offer they made in January, calling for a one-and-a-quarter percent increase in general state aid to schools. Paulsen calls that a “lean forward” position that did not change when state revenue forecasts were decreased by 19-million dollars.

That includes $50 million in new spending for year three of the teacher leadership program that was passed by legislators in 2013 as well as the House GOP’s recommendation to increase general state aid to schools by 1.25 percent.