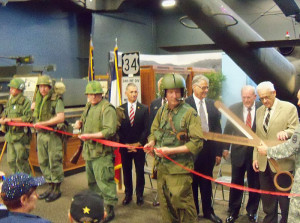 Men dressed in Vietnam era uniforms were present for the ribbon cutting.

Officials with the Iowa Gold Star Military Museum at Camp Dodge cut the ribbon on a Vietnam War exhibit today, 40 years after the war ended.  The U.S. involvement in the war came to a close on April 30th of 1975 with the fall of Saigan.

The chair of the museum board, Bob Holliday, says the exhibit honors the Iowans who served in the war.

“As we live in the freest country in the history of the world, this museum is to recognize that fact. We are not here to glorify as war, because as many of you in this room know there’s absolutely nothing glamorous about a war. That’s not what we’re doing,” Holliday says. Fifty-five-thousand Americans died in the Vietnam war, including more than 865 Iowans. 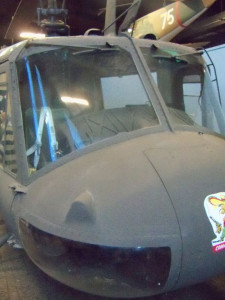 UH-1 “Huey” helicopter which was used in Vietnam.

Holliday says it is important to recognize how the country keeps its freedom. “You can take all the political correctness and leave it out in the parking lot,” Holliday says. “Our military protects those freedoms, for this country and other freedom-loving men and women in this world. Nobody wants a war, that’s not what I am saying — but we need to recognize the fact that we have it pretty good in this country for that matter.”

Museum curator Mike Vogt, says they have several items in the exhibit from the war. “The first iconic object that that will see is a Vietnam war veteran in the form of a UH-1 “Huey” helicopter. It was manufactured in 1963, saw service during the Vietnam War, rotated back to the United States and ended its service life flying with the Iowa National Guard,” Voght says. 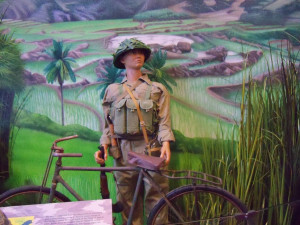 A depiction of a North Vietnamese soldier is part of the exhibit.

The exhibit also tries to show the conditions the soldiers were in when they entered the war.

“We have a diorama depicting a couple of American soldiers walking along a path somewhere in South Vietnam. We also have a figure dressed as a North Vietnamese regular soldier along with a bike that may have been ridden down the Ho Chi Mihn trail,” Vogt explains. “It was captured and given to a Methodist minister who crated it up and shipped it home. He says the only modification that he made in the 40 years he had it is that he put innertubes in the tires.”

Vogt says there is still a lot of emotion surrounding the Vietnam War and the U.S. involvement there. But he says this exhibit is presented the same way as others, as it simply tries to show what the lives of the Iowans were like who served. “What we hope to do is aquatint the public with their story. That they put their hands up, they went where they were ordered to go. The performed admirably, their service, their sacrifice, their blood was shed, trying to make the world a better place,” Vogt says. Five Iowans earned the Medal of Honor, the country’s highest military award, for their service in Vietnam.

This exhibit was made possible by a grant from the Gabus Family Foundation. The Gold Star Museum at Camp Dodge near Johnston is open Monday through Friday from 8:30 A.M. until 4:30 P.M. and Saturday from 10:00 A.M. until 4 P.M. It is free and open to the public.