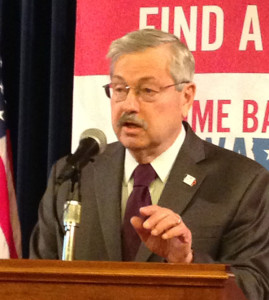 Governor Branstad is urging his fellow Republicans in the Iowa House to pass the anti-bullying bill that has already cleared the Democratically led Iowa Senate.

“This bill passed with strong bipartisan support in the Senate 43-7,” Branstad said this morning during his weekly news conference. “We think it’s critically important that the legislature be approved this year.”

Branstad has proposed similar legislation in each of the past two years and, while it’s been identified as one of his top priorities, it has bogged down in the legislature.

“I just think it’s critically important that we have action this year,” Branstad said.

Last week House Republican leaders said they’re concerned in a section of the bill that would allow school officials to withhold information about a bullying incident from the parents of a student if school officials believe telling the parent would make things worse for the kid.

“I think parents should be notified,” Branstad said. “There may be rare cases where an exception to that might be appropriate, but I think as a general rule parents of both the student being bullied and the suspected bully should be notified.”

Branstad has held two anti-bullying summits and he says many schools are being pro-active in addressing the problem, but the governor said it’s important to have a “statewide program” to ensure students there’s “investigation and follow-up” when students report bullying to teachers, coaches or administrators.

“They just need to debate it and give the members a chance to vote on it because it’s critically important that the students of Iowa have the protection that they need,” Bransad said. “A lot of kids are being bullied. This happens on social media as well as school buses on the school grounds and things like that and it does affect their performance at school.”

Back on April 22, Democrats in the Iowa House tried to force House Republican leaders to bring the anti-bullying bill up for debate and they were joined in the effort by the Republican chairman of the House Education Committee, but 52 other Republicans in the House voted to block the move. Branstad told reporters this morning there is “broad bipartisan support…among the people” of Iowa for the bill and he noted legislators often wait ’til the last minute to act on key bills.