You are here: Home / News / Fiorina and Huckabee campaign in Iowa today

The only female in the field of Republicans seeking the GOP’s 2016 presidential nomination campaigned in Cedar Rapids this morning. Carly Fiorina, the former CEO of Hewlett-Packard, said she expects early contests like Iowa’s Caucuses to be a “process of elimination” rather than a make-or-break moment of “selection” of the party’s nominee.

“We’re three days into a presidential campaign,” Fiorina told reporters, laughing. “And the Iowa Caucuses are obviously very important and they are one of many things that need to happen and so we are not going to put all our eggs in any one basket, but we are going to work hard and compete hard and hopefully continue to perform well at every opportunity, including the Iowa Caucuses.”

While Fiorina formally declared her candidacy on Monday, she has made a handful of previous trips to Iowa and earned roaring responses from Republican audiences for her critiques of Hillary Clinton, the Democratic Party’s likely presidential nominee. And Fiorina stuck to that script today.

“What I want to know is what have you done and the truth is Hillary Clinton hasn’t done a lot except for obfuscate, muddy up, fuzz up a whole bunch of questions,” Fiorina said.

According to Fiorina, it’s time to “change the order” in Washington and choose a president from outside the permanent political class.

About 200 people gathered in a Cedar Rapids coffee shop this morning to meet Fiorina. Another Republican presidential candidate was across the state meeting with about 100 people in Sioux City this morning. 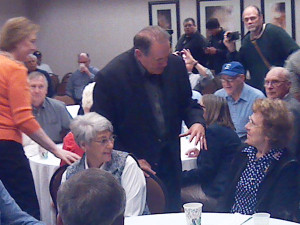 Former Arkansas Governor Mike Huckabee took questions from the crowd — including one about President Obama’s February veto of a bill that would have given the green light to the Keystone XL Pipeline.

Residents in a North Dakota town were evacuated from their homes yesterday when an oil train derailed and caught fire. Huckabee says it would be better to transport that crude oil through a pipeline.

“It is safer. It is more efficient and it is a job-creator,” Huckabee said.

Huckabee campaigned at a Pizza Ranch in Cedar Rapids over the noon-hour. Fiorina is due to speak to a gathering of Dallas County Republican in West Des Moines this evening (Thursday).