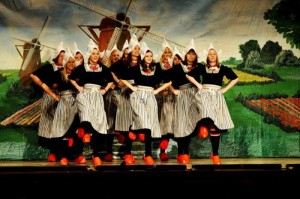 The “Dutch Dozen” perform on Saturday.

“This is something that’s really important to us as the Orange City community, to continue celebrating our heritage and our Dutch roots and we look forward to sharing that with everyone here and everyone who comes to visit,” says Juliana Pennings, the event’s coordinator.

Many Orange City residents will wear their iconic wooden shoes for this weekend’s events. Pennings says the different styles and colors of the costumes that will be worn reflect which territory of the Netherlands their family came from.

“It’s a really fun thing to see, lots of color,” Pennings says. “…We love having so many people wear them.”

A new building opened in downtown Orange City last week where visitors can see and hear the city’s ornate “Dutch street organ” — the only working organ of its kind in the U.S.  The building is called the Stadscentrum. That’s the Dutch word for city center. In addition to serving as the new home for the street organ, the building houses the equipment for making wooden shoes.

“We also had a commemorative book written, telling the story of the 75 years of the festival, so the author will be at Stadscentrum each day doing book signings,” Pennings says. “And then we commissioned an art piece from John Vander Stelt from Maurice, Iowa, to be painted for this year and so the original will also be on display there.”

This annual event started as a flower show in Orange City, then evolved into three-day-long event, with two parades daily and fireworks at night. Tulips are the national flower of the Netherlands and the centerpiece of Orange City’s yearly festival.

“They look very good. The gardens all look really good. The different beds that we have planted around town all look great and the Tulip Town Bulb Company’s startings are flourishing,” she says. “So, yes, the tulips look wonderful for our annual celebration.”

According to the city’s website, Orange City was settled in 1869 by four Dutch men who set out for northwest Iowa from the central Iowa colony of Pella. It was named Orange City in honor of the “Royal House of Orange” — that’s another way to refer to the royal family of the Netherlands.