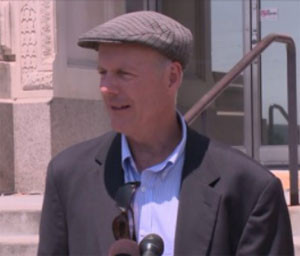 An outspoken critic of the proposed Bakken oil pipeline is vowing to target four legislators for defeat in 2016 if a bill that would make it more difficult to seize property for the project fails to pass the House and Senate this year. Ed Fallon, a former legislator from Des Moines, recently walked the proposed 400-mile pipeline route through the state.

“The vast majority of Iowans overwhelmingly oppose letting a private corporation condemn farmland for an oil pipeline and yet the legislature’s leadership, both Republican and Democrat, refuses to bring up the eminent domain bill for a vote,” Fallon said this morning during a news conference at the statehouse.

“I think this pipeline is probably the worst thing to happen to Iowa and if there are going to be opponents to doing the right thing in both parties, then both parties need to be held accountable,” Fallon said.

Fallon finished third in the 2006 Democratic Primary for governor and he unsuccessfully challenged fellow Democrat Leonard Boswell’s bid for reelection to congress in 2008. Fallon said with his campaign experience, he’ll be able to raise the money and train 100 volunteers to knock on doors in those four statehouse races.

“We will put together a grassroots army of pipeline fighters,” Fallon told reporters. “Now, Iowa’s political establishment should take this seriously because defeating one or two opponents could change the balance of power here at the statehouse.”

Fallon said getting legislators to pass new restrictions for the proposed pipeline this year is critical, as Fallon contends the governor has appointed new people to the Iowa Utilities Board who back the pipeline. Last month Fallon staged a “sit-in” protest in the governor’s office and was charged with trespassing.

Pipeline backers say the project will be an economic boost to the region and they argue it is safer to transport the crude oil from North Dakota through a pipeline rather than by train.