You are here: Home / News / Ernst leads motorcyclists on 45-minute ride to her event in Boone 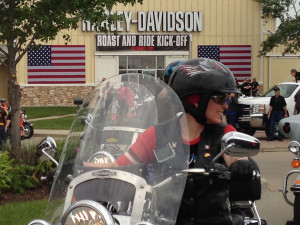 Over 300 motorcyclists gathered at a Harley-Davidson dealership on the north side of Des Moines this morning for a chance to follow Senator Joni Ernst on a 45-minute road cruise to her “Roast and Ride” event in Boone.

“This is actually a bigger turn-out than I had anticipated,” Ernst said, smiling and spreading her hands out wide.

Ernst credited the good weather this morning for drawing more bikers out. One of those bikers was Wisconsin Governor Scott Walker, who pulled out a leather billfold imprinted with the Harley-Davidson logo to show reporters his motorcycle license.

“Should we ultimately decide to be a candidate, we’re going to have some fun along the way,” Walker told reporters, “and this is just one of those examples of how you can have some fun.” 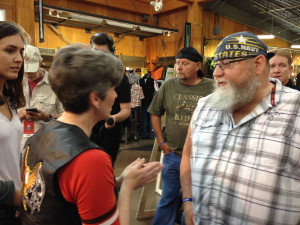 Ernst talks with the public prior to her ride.

He rode a borrowed bike from the Big Barn dealership.

Walker was the only one of the seven Republican presidential hopefuls scheduled to speak at Ernst’s afternoon event in Boone to ride along with the long stream of motorcyclists that stretched for nearly a mile. Just before take-off, Walker was asked if bikers make better politicians.

“They just have a lot of fun,” Walker said, with a laugh.

Ernst was asked if learning to ride a motorcycle is a valuable skill for a politician.

“I think you have to be a leader and you have to make decisive determinations of what path you want to take, so whatever that road is, you have to follow it,” Ernst said. “Just go forward.”

An Iowa band called “The Nadas” was performing for the crowd gathered on the Central Iowa Expo grounds east of Boone when Ernst and her fellow riders arrived. It’s the same band hired to perform at George W. Bush’s Straw Poll party in August of 1999.