You are here: Home / Sports / Chuck Long to return to Big 10 Network for football season 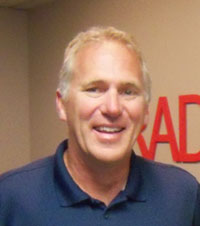 Chuck Long will be returning to the Big Ten Networks this Fall. The former Iowa Hawkeye and NFL quarterback is serving as CEO of the Iowa Sports Foundation, the group that runs the Iowa Games. Long has served as an analyst and studio host for BTN since 2012.

“I’m excited to go back to the Big Ten Network this fall and it’s only a 4 month job, and as my wife says ‘what are you going to do the other 8 months?’ The Iowa Sports Foundation is my meat and potatoes job, but I really enjoy being on TV and doing the Big Ten Network as well,” Long said.

It is an exciting time for the Big Ten after the league captured the first ever College Football Playoff. Long says Ohio State winning the national title was a big boost for the conference and he says the Buckeyes will probably be the preseason favorite to repeat. “I think right now it’s a conference on the rise,” Long says.