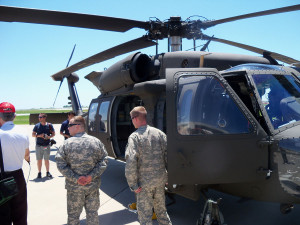 The Iowa National Guard has started receiving the latest model of Blackhawk helicopters, and that could soon mean a transfer of their home base from Boone to Des Moines.

The new models are replacing choppers built in the 1980’s, and include the latest in in high-tech instruments.

Warrant Officer Joedy Vanvelzen says there’s not enough room to keep them all inside in Boone, and that’s why the change is proposed.

“If we had one catastrophic hailstorm, it would create millions of dollars damage to the aircraft that would be outside and exposed to the weather,” Vanvelzen explains. “Obviously we are concerned about the maintenance costs that would be required to repair those.”

He says by moving them to Des Moines they wouldn’t have to worry about high winds and snow and other weather because they would be inside. There’s space in the hangers in Des Moines now that the F-16 jets that used to call the unit home are no longer there. 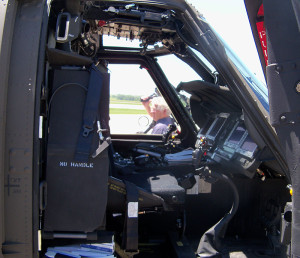 Vanvelzen says they could be getting eight to 10 of the U-H-60 “Mike” model helicopters. He’s not seen the Iowa National Guard get the new models of equipment like this in his 33 years of service.

“To be in a position to where you are getting the new aircraft — the same thing as the active component — says a lot for the state of Iowa. Says a lot for our experience and our safety record as well,” Vanvelzen says.

The leader of the Iowa Guard says the move would save money, as it would take millions of dollars to expand the Boone facility to be able to keep al the copters inside. Vanvelzen says moving the home base of the helicopters would not be that big of a change for the crews.

“A lot our people live or work in the metro area. We do have a lot of the full-time staff that do work in the Boone area. From Boone to the Des Moines airport is probably about a 45 to 50-minute drive,” Vanvelzen says. He says those who live in Boone may decide they want to move closer if the helicopters are moved to Des Moines.

The final decision on moving the helicopters is awaiting approval from the Secretary of the Air Force.