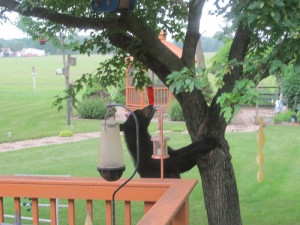 Bear in the backyard of Diane Steffen’s home in Osage.

A young black bear was found dead Sunday night on Highway 20 in northeast Iowa. Kevin Baskins, with the Iowa Department of Natural Resources, says it was likely hit by a vehicle.

“We have no idea who (hit the bear) or what kind of vehicle, but the bear obviously had suffered some very serious wounds from the collision,” Baskins said. The bear’s age is unclear, but it wasn’t a cub and it wasn’t a full grown adult.

“The bear was about five foot in length and maybe 150 pounds,” Baskins said. The bear was hit near Jesup in Buchanan County.

A similar size black bear was recently spotted about 75 miles away near Dubuque. There could be one or two other bears in Iowa. One was recently photographed by Diane Steffen as the bear nibbled on bird feeders in her back yard in Osage.

“We had previous reports of a bear in the Rockford-Rockwell area to the south of (Osage), so we think that’s the same bear,” Baskins said. “We just don’t know whether this one over by Jesup was one of the bears spotted in Dubuque. We were fairly confident there were a couple of bears in Dubuque and this certainly could have been one of them.”

Bears can travel up to 30 miles a day. Bear sightings are becoming a bit more common in Iowa as their populations grow in neighboring states. “Both Minnesota and Wisconsin have healthy bear populations,” Baskins said. “Anytime you have populations of wildlife, including bears, where the populations grow, you’re going to have some individuals who just strike out on their own. Usually, they’re young males.”