You are here: Home / News / Bicyclists raise funds for ‘unjust issues’ with 12-hour ride to Okoboji 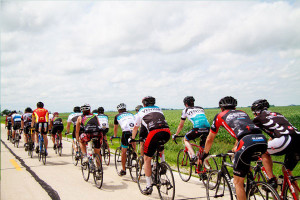 A very ambitious ride for hard-core bicyclists is planned for next week that will go from West Des Moines to Okoboji in about 12 hours.

The Register’s Annual Great Bicycle Ride Across Iowa isn’t easy, but the OK 200 is only for exceptionally serious cyclists.

“Friday, June 26th we leave at 5 a.m. to ride 200 miles in one day, so, half of RAGBRAI in one day,” according to ride co-founder Rocky Vest of Waukee. He says about 35 people are already committed to the ride and there’s room for another 15.

The deadline to sign up for the so-called “double-century” ride is Monday. This is the fifth year for the grueling endurance ride and Vest, who’s done every one, says you have to maintain a fairly rigorous training schedule to pull it off.

“You have to get up early before the kids or anybody’s up,” Vest says. “Ride in the morning and ride hard for at least three rides a week. Mix in some longer rides. If you can do 100 miles on your own, then you’re pretty well set for riding the OK 200.” The ride will take the better part of the day. “Last year, we averaged over 19 miles an hour, like 19.5,” Vest says, “so our ride time was somewhere around 11 and a half hours.”

Besides the cyclists, a half-dozen marathoners plan to run the entire 200-mile course as a relay. Vest, a minister at Westwind Church in Waukee, says funds raised from entry fees and donations go to raise awareness and to help support human trafficking survivors in Iowa and in the nation of Nepal.

“I started this 200-mile ride just to see if I could do it with some friends and then found there’s a whole bunch of crazies out there who climb mountains or run across the state,” Vest says. “We use it as a platform to raise awareness and funds for unjust issues in the world.”

The ride raised $36,000 last year alone and a total of $54,000 in the past three years. Vest says an estimated 27 million adults and 13 million children worldwide are victims of human trafficking, or more than 12 times the total population of the state of Iowa.