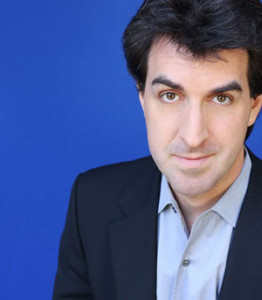 A celebrated Broadway composer will take the baton to guest-direct the Des Moines Symphony at next week’s big musical event on the state capitol grounds to kick off the Fourth of July weekend.

Jason Robert Brown will conduct a series of songs from “The Bridges of Madison County,” for which he wrote the music, lyrics and orchestrations.

“This is so exciting for us,” Ahmad says. “He is a three-time Tony Award-winning composer and he will conduct the orchestra in selections from this Broadway musical. ‘Bridges,’ as we know, is famously set in Iowa and the musical launches its national tour in November at the Des Moines Civic Center.” 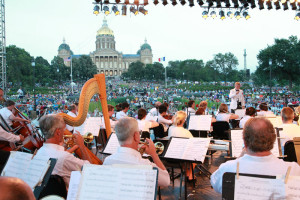 Thousands gather each year for the Yankee Doodle Pops event at the state capitol.

The 22nd annual Yankee Doodle Pops concert is scheduled for next Thursday, July 2nd, at 8:30 p.m. Admission is free.

“The Des Moines Symphony’s Yankee Doodle Pops is the state’s largest single-day concert event,” Ahmad says, “and we draw an average of 100,000 people each year to the beautiful West Terrace of the Iowa State Capitol.”

The concert’s theme this year is, “Iowa: America’s Musical Heartland,” and it will feature music inspired by our state, including selections from “State Fair” and “The Music Man.” Ahmad says, “We have music from the world premiere of a piece called, ‘Symphony on a Stick,’ which the orchestra and our music director Joseph Giunta commissioned to celebrate our great Iowa State Fair.”

There will also be an Armed Forces Salute, led by Governor Branstad, and the show will conclude with the famed “1812 Overture” and other famous marches as fireworks light up the downtown sky.