Two people were injured when a building under construction collapsed in Evansdale Wednesday afternoon.

One man who was trapped under the rubble was pulled from the debris and placed on a stretcher.

A second man who had been standing after the accident was later loaded into another ambulance. Both victims were taken to a local hospital for what treatment of what officials are calling non-life threatening injuries, although Evansdale’s police chief described the injuries to one of the victims as serious. 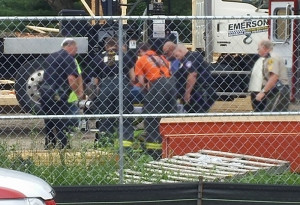 There were about 20 construction workers at the site when the accident happened around 2 p.m.

A new Kwik Star convenicen store is being built at the site. Witnesses say they heard the sounds of timber cracking and then saw the building’s framework fall like dominoes.

Officials don’t yet know what caused the collapse.