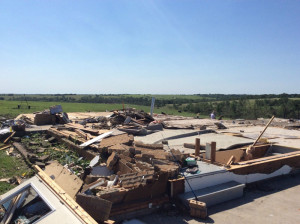 This home was destroyed by the tornado.

The National Weather Service is reporting the tornado that ripped through parts of southern Iowa Monday night covered a 25-mile long path and stayed on the ground for just over an hour.

“The peak wind gusts were up around 142 miles an hour. That’s an EF-3 tornado, which occurred at a farmstead southwest of Lovilia,”

Trees damaged by the storm.

Cogill said. At its peak, the tornado had an estimated width of 440 yards. It generally stayed in rural areas, but eventually struck homes and businesses in Albia.

“As it impacted the southwest side of Albia…the top wind speeds we had estimated there were 103 miles an hour,” Cogill said.

Despite all the destruction, there were no reports of injuries.