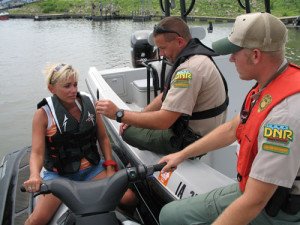 The DNR and other agencies will be out looking for drunken boaters this weekend.

“Last year we were able to check approximately 1,100 boaters and we contacted more than 354 vessels that were out there,” Stocker says. Stocker says boating drunk can have severe consequences for you and your passengers.

“More than 71 percent of our boating fatalities in 2014 involved alcohol. So we are stepping up the effort….in order to curb the intoxicated boater who wants to operate a boat,” Stocker says. Twelve people were arrested on the Mississippi River for operating a boat while under the influence, and Stocker says it once again a focus for Operation Dry Water.

“We will continually find that area with a lot of DWI arrests,” Stocker says, “and so we need to realize and put it into perspective, it runs the whole length of the state. So, we are talking all they way northeast from Allamakee County all the way to the southeast. So, that’s why we have a lot of DWI arrests on the Mississippi River.”

The one dozen arrests for drunken boating on the Mississippi last year were part of 41 overall arrests. Eight people were arrested at Coralville Lake last year, five at Clear Lake, four on the Des Moines River and three at Saylorville Lake.

There is a simple step you should take to keep things safe. “Make sure that you do have a designated driver — just like if you were driving a car you would have a designated driver — to operate a boat. And or, wait until you are done for the afternoon to enjoy a beverage on the shore,” Stocker says. The blood alcohol level for boating while intoxicated was reduced in 2001 from .10 percent to .08 percent to make it the same level as driving a car while intoxicated.