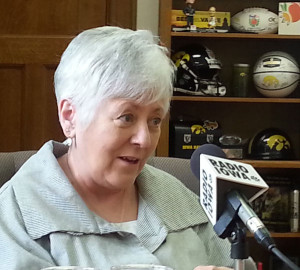 University of Iowa president Sally Mason has just concluded a three-year run as chair of the Council of Big Ten Conference Presidents and Chancellors,

“One of the things I have greatly appreciated here is that we have a strong focus on academics with our student athletes. We have very, very high graduation rates,” Mason said during an interview with Radio Iowa.

The graduation rate for Hawkeye athletics is higher than Iowa State’s and Northern Iowa’s and is 12 points higher than the national average.

“So from my perspective as I look at the Hawkeyes and what our coaches are doing, I’m pretty pleased,” Mason said.

Mason credits University of Iowa Athletic Director Gary Barta with “slowly and methodically” evaluating each sport and bringing in coaches who not only win on the field of play, but ensure their players succeed in the classroom.

“Baseball being the latest example. A new coach there, did a great of recruiting, had an amazing season — haven’t had a season that good in over 30 years — and the best player has decided to come back for his senior year despite the fact that he has a pro opportunity in front of him, too,” Mason said. “That’s what I like about Hawkeye athletes and Hawkeye athletics.”

In addition, Mason points out that Iowa is the only university in the country to have “multiple” Academic All-Americans on its men’s and women’s basketball teams.

“No one was more surprised than me to shake Mike Gesell’s hand at graduation,” Mason said. “In fact, when he came across the stage I said: ‘Mike, you’re graduating!’ And he said: ‘Don’t worry. I’ll be back next year.”

Gesell earned an undergraduate degree in finance this spring with a grade point average of 3.93. He will take graduate-level courses in the fall and spring, during what will be considered his senior season on the Hawkeye basketball team. Mason praised Gesell for opting to stay in college for all four years.

“I’ve been asked about my alma mater Kentucky,” Mason said “I have publicly said that the one-and-done philosophy that like institutions like Kentucky seem to be practicing, especially right now, is not something I would ever aspire to, whether I was in athletics or a university president or whatever it might be. I just don’t see that that should be the student athlete experience.”

Student athletes at another Big Ten school, Northwestern, have filed a lawsuit pressing to be paid. Mason considers that a slippery slope. Mason said student athletes should have the “full cost” of going to college covered, and that includes tuition, books and housing in addition to health insurance and enough money to cover food costs, like a late-night pizza.

“That’s not pay-for-play, though. That’s not making them an employee and paying them a salary,” Mason said. “To me it’s more like: ‘You’ve earned this opportunity and as long as you continue to earn the opportunity, we will make it possible for you to do this with the least possible financial stress on you.'”

Mason is retiring after eight years as leader of the University of Iowa. She took the job in Iowa City after serving as the chief academic officer at Purdue University. Before that, Mason spent 20 years on the faculty at the University of Kansas.

“I thought I’d seen tailgating. I thought I understood fan bases until I got to Hawkeye Land. It’s a whole new experience and it is remarkable on a football Saturday here in Iowa City to see this place transformed. You know, 100,000 people come to town,” Mason said. “We only have room for 72,000 in the stadium, so they’re coming because it’s an event.”

Mason attended her last Big Ten Conference meeting in mid-June. Her last day as University of Iowa president is July 31.