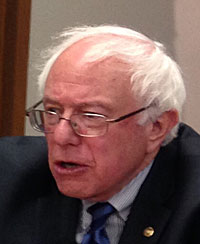 A new poll shows Vermont Senator Bernie Sanders “gaining ground” in Iowa, securing the support of about a third of the Democrats who intend to go to the 2016 Iowa Caucuses. Democratic candidate Hillary Clinton got the support of 52 percent of those polled and Sanders got 33 percent.

“Former Secretary of State Hillary Clinton remains ahead among Iowa Democrats, there’s no surprise there,” says Peter Brown, assistant director of the Quinnipiac University Poll,” but her margin over her major challenger at this point on the Democratic side, Senator Bernie Sanders of Vermont, has shrunk fairly dramatically.”

Sanders has more than doubled his standing in Iowa compared to the last Quinnipiac Poll conducted here in May.

“Obviously he is the surging candidate. The data indicates that Democrats who describe themselves as more liberal are more likely to favor Mr. Sanders than they are Secretary Clinton,” Brown says. “It’s not that Secretary Clinton needs to start biting her fingernails. It’s not that close at this point, but we’re seven or eight months away from the Caucus and Senator Sanders is within hailing distance of Secretary Clinton and that’s a surprise to some people.”

Sanders got five percent support in the Quinnipiac Poll conducted here in January. Sanders has visited the state often in the past six months, attracting large crowds in large and small cities.

“Senator Sanders has struck a chord with Democratic progressives who are perhaps somewhat disillusioned with Secretary Clinton,” Brown says.

But while national polls have shown Clinton’s favorability rating is declining, 77 percent of Iowa Democrats still view Clinton as honest and trustworthy and 85 percent view her positively according to the Quinnipiac Poll.

“She gets strong scores on leadership and understanding the problems of every day voters,” Brown says.

Vice President Joe Biden got seven percent support in the latest Quinnipiac Poll of likely Democratic Caucus goers. Biden has said he’ll decide by the end of the summer if he’ll run for the Democratic Party’s next presidential nomination. Former Maryland Governor Martin O’Malley formally entered the race last month and is campaigning in Iowa today (Thursday). He registered at three percent. Former Virginia Senator Jim Webb is expected to jump into this race this month. He had one percent.

Five percent of the Iowa Democrats surveyed said they were undecided.