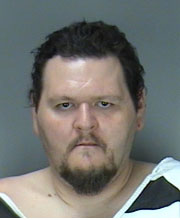 It didn’t take Des Moines Police long to catch a bank robbery suspect today. Police Sergeant Jason Halifax says the man accused of robbing a Bankers Trust location on the city’s southeast side just before 11 a.m. was tracked down a short time later at a nearby Walmart store.

“The suspect was located inside the store…and when he was approached by officers, he was in possession of the cash,” Halifax said. No weapon was used in the robbery. The suspect is identified as 48-year-old Joe Pendergrass of Des Moines. A GPS tracker was placed with the stolen money which helped police locate Pendergrass.

Halifax isn’t sure if Pendergrass intended to spend the money at Walmart that he took moments earlier from the bank. “The tellers at the bank indicated there was almost no urgency in what he was doing, he was very laid-back in what he was doing,” Halifax said. “It’s kind of curious how that transpired with the way he reacted or didn’t react…kind of a nonchalant way is pretty unusual to have someone react that way after robbing a bank.”

Pendergrass was arrested for robbing the same bank 7 years ago this month, according to Halifax.