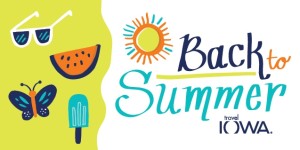 Governor Terry Branstad won his battle to delay the start of school in Iowa ’til later in August and his tourism office is now offering coupons and other incentives to boost attendance at Iowa tourism sites.

“We have just passed the unofficial halfway point of the summer, (the) 4th of July holiday weekend. However, Iowa families still have plenty of time to travel to our state’s very fine attractions,” Branstad says. “Summer travel in Iowa is important to our state’s economy. The average summer day generates $32.4 million in tourism related revenue.”

Lieutenant Governor Kim Reynolds is touting the new “Back to Summer” deals for Iowans.

“The Iowa Tourism office has collected nearly 70 deals and discounts from industry partners to encourage Iowans to get back to summer in August,” Reynolds says.

The entire collection of summer deals are available online and on Facebook.