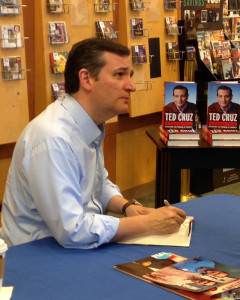 Republican presidential candidate Ted Cruz says his new book will show grassroots Republicans how their current national leaders are corrupted by the “cartel” of lobbyists and special interests in Washington.

Cruz accused GOP leaders in the House and Senate of being “in bed” with lobbyists who are pushing programs, like subsidies for sugar, that aren’t benefitted the country as a whole, but are lining the pockets of a few.

“If you’ve ever wondered what’s happening when Republican leadership is breaking the promises that they’ve made to the grassroots conservatives who’ve elected us to serve in congress,” Cruz said, “this book is a candid and frank discussion of what’s happening behind the scenes.”

There’s a “bipartisan culture of corruption” in Washington, according to Cruz, and he said it’s time to end government policies that pick economic “winners and losers.”

About 60 people were waiting for Cruz when he arrived at the West Des Moines bookstore to sign copies of his book, titled: “A Time for Truth.” Cruz will be at the Barnes and Noble in Sioux City at 10 o’clock Tuesday morning for another book-signing event.