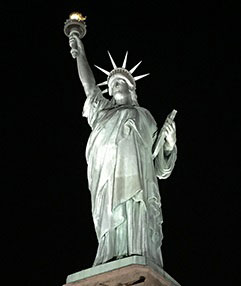 Musco Lighting of Oskaloosa supplied new lights for the Statue of Liberty.

A new lighting system, provided by an Iowa-based company, will shine on the Statue of Liberty for the first time tonight.

“So, the image of it is more totally rendered. LED allows to do more detail type things,” Crookham says. The new lights will be activated at sunset. Much of the previous lighting system was installed below ground and damaged in Superstorm Sandy in 2012. Musco installed a temporary system in November of 2012.

The new permanent system is expected to greatly reduce energy consumption. “I suppose we’re probably taking between 60 and 75 percent of the energy cost out of the lighting system by switching over to this,” Crookham says. In addition to Lady Liberty in New York, Musco lighting systems are in place at the Washington Monument, the White House, Mount Rushmore, and the Flight 93 National Memorial.