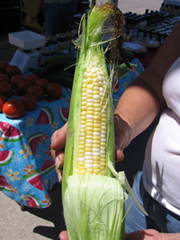 We hear reports on Iowa’s corn and soybean crops from the U.S.D.A every week, but one thing we don’t hear updated often is the condition of Iowa’s sweet corn crop. Iowa Ag Secretary Bill Northey says so far, so good.

“We’ve seen just a little sweet corn coming around and we’ll see a lot more in the next several weeks,” Northey says. “I’m hearing there’s a really good crop out there and it’s a great time of year for sweet corn.”

Northey said the condition of the sweet corn crop varies in different areas of Iowa.

“We have some parts of the state that have gotten too much water,” he says, “so in those cases, if the sweet corn was in a low area and got too much water, that may be either hard to harvest or may even be such that it just drowned out pieces of that sweet corn or set it back.”

Favorable reports have come from many sections of the state, especially northwest and north-central Iowa. Northey says the first locally-grown corn started appearing around the 4th of July weekend and vendors are ready to sell the golden ears.

“It’s a great time to pick up sweet corn at farmers markets,” Northey says. “There’s a lot of local sweet corn that’ll be sold in our grocery stores and of course, we have a series of festivals around that are centered on sweet corn, from now until almost Labor Day.”

Some of the bigger sweet corn festivals in the state include those in Adel on August 9th, West Point on August 13th and Des Moines on August 29th.