You are here: Home / News / Couple moved from Hawaii to Iowa — for the Caucus Experience 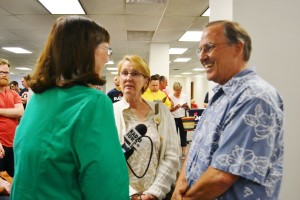 Mr. and Mrs. Host at a Rand Paul event.

It’s not often you hear of someone leaving a tropical paradise to move to Iowa.

And she’s not talking about the Iowa weather. She and her husband, Rob, retired and then moved from Hawaii to Iowa for one reason only: to have the Iowa Caucus Experience.

The couple has been here, there and everywhere in Iowa over the past two months since they arrived. They’ve already seen most of the candidates who’ve been stumping in the Iowa political habitat, like the Iowa City Public Library where Hillary Clinton spoke last week, the café in Clarinda where Mike Huckabee stopped last month and the campaign office in Des Moines where Rand Paul met with supporters over the Independence Day weekend.

“We are Democrats, but our interest is to see the entire process, whether it be Republican or Democrat,” Rob Host says.

Claudia Host adds: “This year more than any year is going to be so important because the field is so large for the Republicans.”

Claudia Host has been impressed with the Iowa crowds.

“If you’ve never lived anywhere else, you don’t appreciate the difference,” she says, “and how seriously everyone takes their responsibility to listen to the candidates and educate themselves.”

Both are 63 years old. Rob is originally from California. Claudia is a New York native. They’d never seen a candidate for the White House up close before they arrived.

“Obviously they’d never travel to Hawaii,” Rob Host says. “But the states generally go Democrat so you don’t get a whole lot of participation even in the process, where here, I mean, you can walk up and say, ‘Hello,’ shake their hands and ask them a question if you’ve got a question.”

The couple decided the cost of living in Hawaii was too steep after they retired, so earlier this year they flew from Hawaii to California and visited friends along the way as they drove cross-country, making their way to Iowa.

“So many of our friends just said, ‘It doesn’t matter. There’s so much money in politics and it doesn’t matter what I think’…but here you get to Iowa and I see people getting out of their houses and they do believe that what they have to say, what their vote is counts and it’s refreshing, inspiring,” Claudia Host says.

Her husband chimes in with an affirmation: “Very inspiring, yes.”

The couple has a year-long lease on a place in West Des Moines, chosen because of its central location, so they can dash off to all four corners of the state to see candidates.

“It’s just so different than when you see it on TV and you’re seeing it through the bias of whoever it is that’s telling you about the event,” Claudia Host says. “This is very different.”

And better, they both say. So, if you’re at a campaign event and see someone wearing a Hawaiian shirt, it may be Rob.

“It’s all I’ve got,” he says, with a laugh. “Fortunately we got here after the winter ended, so these’ll last me ’til, I guess, September.”