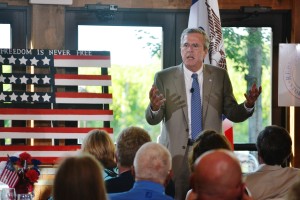 Republican presidential candidate Jeb Bush is warning his party against making the 2016 campaign about “trivial things.”

“It shouldn’t be about the things that really are great for television, kind of inflammatory stuff,” Bush said tonight in Ames. “It should be about these big, basic questions: What is the role of our country going forward? Are we going to lead by example of high, sustained growth and security?”

Bush gave a speech at Morningside College in Sioux City this afternoon and he was the headliner at a Story County GOP fundraiser tonight in Ames. In both stops Bush confronted Hillary Clinton’s criticism of his recent suggestion that one way to spur U.S. economic growth is to have Americans work longer hours.

“Hillary Clinton has attacked me…Just for the record: Bring it on,” Bush said in Ames. “This warms my heart that she’s upset that I say 6.5 million people in this country are working part-time when they want to work full-time.”

In Sioux City, Bush countered that Clinton is apparently willing to accept the current workforce participation rates, which haven’t been this low since the late ’70s.

“I believe that we ought to create high, sustained economic growth where those 6.5 million people instead of being stuck in 30 hour (a week) jobs, can be able to rise up, can get a full-time job,” Bush said, “…can be able to provide for their family, can have the benefit of achieving earned success and the joy and happiness that comes from that.”

Nearly 250 people gathered to see Bush in Sioux City and he repeated his promise to campaign in a “hopeful, optimistic” way. Bush told the crowd tonight in Ames that Americans “mope around…way too much.”

“I hope you haven’t given up,” Bush said in Ames. “I hope you won’t fall prey to the louder voices in our own party and certainly of the other party that are always trying to divide us, to separate us, rather than trying to unite us.”

Bush has a public campaign event scheduled over the noon-hour tomorrow in Council Bluffs.