You are here: Home / News / Fiorina on a four-day swing through Iowa 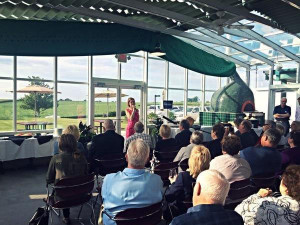 Carly Fiorina photo in Leighton from her twitter feed.

Republican Carly Fiorina is among the 16 “official” presidential candidates in her party, but she’s unlikely to be featured in the first televised debate in August.

FOX News will invite just 10 of the candidates on stage — the top 10 in national polls — and Fiorina says that decision is out of her control.

“What I can control is to work as hard as possible to make sure that people know me,” Fiorina says.

Fiorina was at a winery in Leighton, Iowa, last night, her first stop on a four-day swing through the state and she’s using her signature lines with audiences here.

“My resume’s different. My experience set is different,” Fiorina said. “Oh, by the way, I look different.”

Fiorina is the former CEO of Hewlett Packard and she’s never held elected office before, although she ran unsuccessfully for a California senate seat in 2010. She is the only woman in the large field of GOP presidential candidates and James Huyser of Pella wants to see Fiorina debate Hillary Clinton.

Huyser was among about 70 people who heard Fiorina speak last night at a fundraiser for a local Republican legislator. Fiorina will campaign today in Marshalltown, Webster City, Fort Dodge, and Ames.