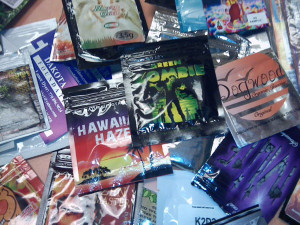 A Georgia man whose son died after using synthetic marijuana was the keynote speaker Thursday at a conference on synthetic drugs in Sergeant Bluff. Lynn Dyer’s 14-year-old son Dakota took his own life three years ago.

“He tried it once. He tried it and went through what they call a psychotic break, took his handgun and shot himself in the head,” Dyer says. “He made an extremely bad decision over a very shot amount of time — and it cost him his life.” Dyer’s wife is a health care professional and he says they had no idea that K-2, Spice and other such synthetic drugs existed, or that their son knew about them.

“We’d had all the talks with our sons — the alcohol, the sex talk, the drug talk — we had them all. We didn’t know what synthetic drugs were, she didn’t and she dealt with drugs every day in the hospital. And when we found out what facilitated our son’s death, we became self-educated,” Dyer explains.

The Bremen, Georgia resident established a foundation in his son’s name and travels the country speaking about the dangers of synthetic drugs. He has three goals. “Education of our young people and parents. Two is to facilitate and help law enforcement, first responders and EMS with education, awareness and information on where this stuff is coming from. And third, is hopefully, prevent a parent from going through what we went through,” Dyer says.

He says the substances are packaged in pouches designed to appeal to teens. “They market these products strictly to our young people. You see flashy little bags, you see one that has Scooby Doo on it called Scooby Snacks, you see on that has the smiley face on it,” Dyer says. “There’s just countless different kinds and they are all in flashy little bags geared to our young people.” You can find out more about the danges of the drug at the Dakota Dyer Foundation(dakotadyerfoundation.org).