You are here: Home / News / Kasich: ‘I don’t think those who yell the loudest represent the majority’ 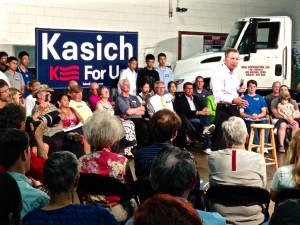 Republican presidential candidate John Kasich this afternoon said rather than tap into voters’ anger and fears, he’ll stick to a message of unity.

“…My message is one of unity, it’s of economic growth and making sure that everybody in America feels as thought they have. have a chance.”

Kasich, the governor Ohio, held a town hall meeting in Des Moines late this afternoon, inside a beer distributor’s warehouse, right after spending time at a picnic with the company’s employees. Kasich did not refer to his competitors for the GOP’s presidential nomination by name during the interview or the town hall meeting. Kasich presented himself to the crowd as a “believer in the underdog,” and a big state governor with a record of balancing Ohio’s budget as well as the federal budget when he was chairman of the U.S. House Budget Committee in the 1990s.

“I think what we need as a leader is somebody who has experience, somebody who’s been able to turn things around when there were serious problems,” Kasich told Radio Iowa, “and not just a bunch of rhetoric and a lot of talk and, frankly, I don’t think those who yell the loudest represent the majority anyway.”

Kasich formally kicked off his campaign this past Monday, the 16th Republican to enter the 2016 race. A Quinnipiac University Poll released this week found 82 percent of registered Iowa voters didn’t know enough about Kasich to have formed an opinion about him. Kasich is unlikely to be among the 10 candidates who register high enough in national polls to be invited to the first televised candidate debate on August 6th — in his home state of Ohio.

“Maybe we’ll get there, I don’t know, but it’s a long way to Tipperary,” Kasich said during his interview with Radio Iowa, referencing the song that was popular during the World War I era. “You know it’s a long way to the nomination, so, you know, if this doesn’t work, you go to the next thing. All my life I’ve fought against very huge odds and seemed to be able to prevail. We’ll see here.”

A man in the crowd at the town hall meeting asked what he and others could do to help get Kasich on the debate stage. Kasich told the crowd he doesn’t have a recognizable name nationwide because he was busy doing his job in Ohio rather than traveling the country “promoting myself.”

AUDIO of first 20:00 of Kasich town hall (until the point when temporary power lapse knocked out audio feed)

AUDIO of second half of Kasich town hall, 30:00