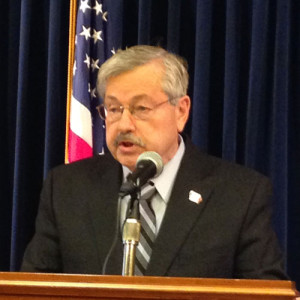 “It’s way early and polls at this point in time tend to reflect name recognition,” Branstad told reporters this morning. “And, obviously, he’s a TV personality who has a lot of recognition, but there’s a lot of really good candidates in this race.”

Trump is tops in several recent national polls and a couple of recent surveys focusing solely on Iowa Caucus-goers found Wisconsin Governor Scott Walker in the lead, with Trump surging into second place.

“I don’t think he’s going to be the nominee, but you know he, like any other candidate, has an opportunity to express their viewpoint,” Branstad said. “If you remember what happened four years ago, we had a lot of people that were the front-runner at some point in time, but Iowans tend to reward people that work hard and spent a lot of time in the state.”

Trump announced in mid-June that he would run for president and he’s appeared at three events in Iowa since then, including a weekend rally in Oskaloosa that attracted a crowd of more than 14-hundred people. The candidate who has spent the most time in Iowa is Rick Perry and Branstad predicts the former Texas governor “will do a lot better” in the Iowa Caucuses than expected.

AUDIO of Branstad speaking with reporters on this and other topics this morning, 21:30