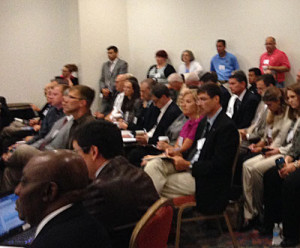 Chicken and turkey producers listen during a conference on bird flu.

Hundreds of poultry producers are participating in a two-day seminar both in person and on-line, to discuss the deadly bird flu outbreak. U.S. Ag Secretary Tom Vilsack was the first to address the group.

“I want to thank the producers who are in the audience today,” Vilsack said. “I want you to know that we recognize and appreciate how difficult this has been for producers and their families. It’s why we have been working hard to try to deal with the onslaught of avian influenza and why we are taking steps to be prepared should it reemerge in the fall.”

Iowa Poultry Association executive director Randy Olson greeted producers as they entered the meeting room in Des Moines where the seminar is being staged.

“The folks who have emptied barns and are working on cleaning are tired,” Olson said, with a laugh. “They’ve been working very, very hard…We’re thankful that we haven’t had new outbreaks in the last five to six weeks now. We’re really trying to learn as much as we can about prevention going forward. This conference will help our industry do that.” 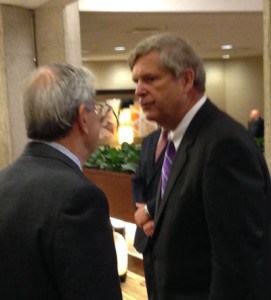 The U.S.D.A. is developing a list of disposal sites if bird flu recurs in the fall, plus Vilsack said a more effective vaccine may soon be ready. Vilsack has set aside money in the U.S.D.A.’s budget to buy a stockpile of that vaccine.

It will be up to the officials in each state to determine whether chickens and turkeys will get the vaccine, once it’s ready. Iowa Governor Terry Branstad hasn’t decided whether he’d permit it because some countries might bar imports of U.S. poultry and eggs if the birds are vaccinated.

“So we’re going to continue to review and look at the evidence and information about this and how effective it is,” Branstad told reporters this morning.

The only vaccine currently available for all poultry is just 60 percent effective. Vilsack told reporters that a new strain of vaccine is 100 percent effective for chickens and researchers are conducting tests to determine how it works for turkeys.

“I don’t want to say how long that’s going to take, but I will tell you we’re in a better space than we were, say, six months ago or six weeks ago when all we had was a vaccine that was 60 percent effective and that’s really not good enough,” Vilsack said. “You need something that’s 100 percent effective.”

Vilsack has asked his staff to prepare for reemergence of the bird flu in the fall not just in the states that were hit this spring, but in all states.

“The challenge with this is it mutates,” Vilsack said. “It changes. It literally changes as it migrates across the country.”

Here are the latest stats: