You are here: Home / News / One of country’s leading environmental activists urging Iowans to engage candidates on climate change issue 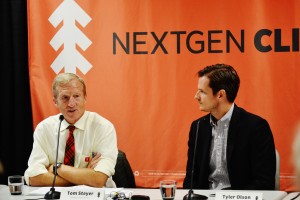 A California billionaire who has spent more than $100 million to help elect Democrats across the country is urging Iowans to pressure the 2016 presidential candidates to address climate change.

“From now on, we’ve really got to start talking about the best way to solve the climate problem and, for that, here we are in Iowa, in the second half of 2015. We need leaders who are going to talk about plans,” said Tom Steyer, founder and president of NextGen Climate Action.

Steyer made his fortune as a hedge fund manager and his NextGen Climate Action is one of the “Super PACs” that has become very influential on the political scene. Steyer has made it clear he won’t back any candidate who does not aim to ensure that at least half the nation’s electricity comes from “clean” sources by 2030 and he is urging Iowans to join his cause.

“The issue right now is no longer about technology. Right now, the question is all about politics,” Steyer said. “With the right leadership, it turns it from a global problem to an American solution and that’s what we’re going for.”

Steyer led a roundtable discussion today at the Energy Center at the Des Moines Area Community College in Ankeny. Steyer’s group has paid staff on the ground in Iowa, working to steer the campaign conversation among Democratic and Republican candidates toward climate change.