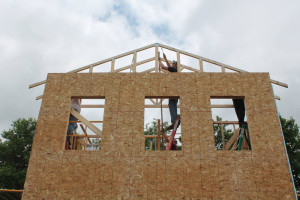 “It’ll be a lot of work, but we are up to the challenge,” Parrish said. The Waterloo City Council this week agreed to Habitat’s plans and is selling the land for one dollar. The development will go up at the former site of Waterloo’s Irving Elementary School.

Lindsay Pieters is the head of marketing and development for Iowa Heartland Habitat for Humanity. She told KCRG TV this project is twice as big as anything they’ve done before. “We have done some, like five and seven houses together, but not 14 houses,” Pieters said. The project will feature five different styles of homes. Construction is expected to start in the fall. It’ll take about three years to finish all of the homes. Those who become the homeowners have to help build their houses.

They also have to pay off a mortgage, but it’s affordable because they have a zero-percent interest loan.