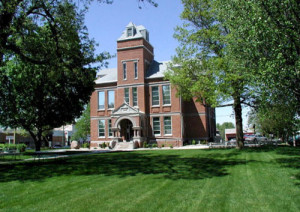 Security is always an important issue at Iowa’s 99 county courthouses and one aging building in far southwest Iowa is battling a persistent invader — bats.

The attic of the Fremont County Courthouse in Sidney had a few holes and that’s all it took for the flying rodents to gain access and spread throughout the building, according to county supervisor’s chairman Randy Hickey.

“There were a few in some of the offices,” Hickey says, laughing. “That scares the heck out of people, when you see a bat flying around.” Hickey says the bats likely migrated from the former Sidney United Methodist Church nearby. “What happened is they’re tearing that church down north of us,” Hickey says. “Some of them got in. There were going in there and the custodian was going in, plugging holes. So, we’re trying to get it plugged off. There might have been some that got in there and if he (the custodian) plugged it off, they were flying around in there.”

Hickey says it’s easy for the pointy-eared mammals to slip through courthouse’s spaces and holes. “A bat’s just like a little mouse,” he said. “It can go in a little hole anywhere. He was up there, plugging all the holes he could plug up in the attic, making sure they couldn’t get in.”

It’s not the first time the creatures have invaded the courthouse. “We’ve had a little bit of a problem in the years past with bats in there,” he said. “Their migration time is right now. We’re just watching it. We haven’t had any in there for a while, so, the custodian is watching it and making sure.”

The Fremont County Courthouse was built in 1889 and was named to the National Register of Historic Places in 1981.