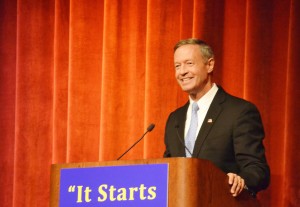 Martin O’Malley, one of four Democrats who spoke at the Iowa Federation of Labor’s forum today in Altoona.

Four Democratic presidential candidates pledged to boost union bargaining rights and expressed support for a hike in the minimum wage during appearances this afternoon at the Iowa Federation of Labor’s annual convention. Former Maryland Governor Martin O’Malley promised to take steps to make it easier to join and form a union.

“There is no one running for president of the United States in either party who has a better pro-worker, pro-labor record than I do. I don’t just make progressive promises,” O’Malley said and he pounded the lectern during the next sentence. “I get progressive results.”

“Our trade deals should not be designed to create a greased chute to send American jobs abroad in the name of corporate, multinational profits,” O’Malley said.

Vermont Senator Bernie Sanders appeared before the group via a video hook-up from Washington, D.C. 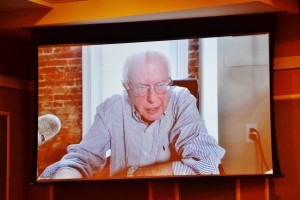 Bernie Sanders speaking at the forum via video stream.

“I guess the point I want to make is for me, workers rights and fighting to protect the middle class and supporting trade unionism is not just another issue,” Sanders said. “It is what my life is about. It’s what I believe.”

Sanders said Americans have a constitutional right to join a union and he called trade deals like the Trans Pacific Partnership “disastrous”.

“I’m a friend of President Obama,” Sanders said. “I work with him on many issues, but he is dead, dead, dead wrong on this whole TPP thing.”

Former Virginia Senator Jim Webb and former Rhode Island Governor Lincoln Chafee also spoke to the union crowd. Chafee touted his opposition to the Iraq war, his “scandal-free” political career and his support of union issues as he served as a mayor, U.S. senator and governor.

“I’m the peace candidate, not only abroad, but with labor also,” Chafee said.

Webb repeated his call for delaying a vote in congress on the Trans Pacific Partnership until after the 2016 election.

“Have it fully debated during this election cycle and have it used as a vehicle to help people in this country understand what we need when it comes to a foreign trade agreement,” Webb said.

While Webb has criticized a “lack of transparency” about the trade deal, he has not yet said it should be rejected. Webb touted his status as a union member. He belongs to the Writers Guild. Webb told the audience organized labor is the friend of the working people in America.

Each candidate was given half an hour on stage and part of the time was spent answering questions from a panel of union leaders. The event was held at The Meadows Events and Conference Center in Altoona,  the only hotel complex in the state where workers are unionized.